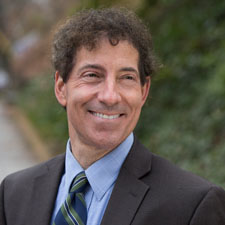 Congressman Jamie Raskin represents Maryland’s 8th District, which includes parts of Montgomery, Carroll, and Frederick counties. He is the Vice Ranking Member of the House Judiciary Committee, a Senior Whip for the Democratic Caucus, the Freshman class representative to the Democratic Steering & Policy Committee, and a Vice-Chair of the Progressive Caucus. He also serves on the House Oversight & Government Reform Committee and the Committee on House Administration.

Representative Raskin has also been a constitutional law professor at American University Washington College of Law for 25 years. He is the bestselling author of Overruling Democracy: the Supreme Court versus the American People and We the Students: Supreme Court Cases for and About Students and founder of the Marshall-Brennan Constitutional Literacy Project, which has sent hundreds of law students into public high schools across the country to teach a course in “constitutional literacy.”

Prior to his time in Congress, Rep. Raskin was a three-term Maryland State Senator and the Maryland Senate Majority Whip. In his decade as a State Senator, Raskin won a reputation for building coalitions in Annapolis to deliver landmark policy accomplishments. He successfully introduced and championed marriage equality; abolition of the death penalty; restoration of voting rights to former prisoners; raising the state’s minimum wage; the nation’s first National Popular Vote law; the nation’s first Benefit Corporations Law; the Green Maryland Act; the lowering of the state voter registration age to 16; and granting 17-year olds the right to vote in primary elections.

Congressman Raskin is a longtime champion of the separation of church and state. Years ago, he was asked to testify in the Maryland Senate about a proposed constitutional amendment to ban marriage for gay citizens in the state. After his testimony, Senator Nancy Jacobs of Harford County said, “Professor Raskin, you keep talking about equal protection and due process, but what about the Bible? The Bible says marriage is between one man and one woman.”

All session by Representative Jamie Raskin

The Honorable Jamie Raskin, Co-Chairman and Founding Member of the Congressional Freethought Caucus