What are we fighting for?

We’re all here because we share a conviction: that the Unites States government was founded to be a secular one—where policy is formed based on evidence, research, and fact rather than religious belief.

Right now, that is NOT the case. We know our leaders are missing the mark, allowing their personal religious beliefs, or those of others, to excuse discrimination, neglect, risks to public safety, and so much more.

That’s why all year, we, along with our member organizations and partners around the country, meet with lawmakers and staff in D.C. and beyond to fight for a better, secular government.

One time a year, we elevate that tireless work by gathering as many secular Americans as possible in Washington D.C. for a show of force: 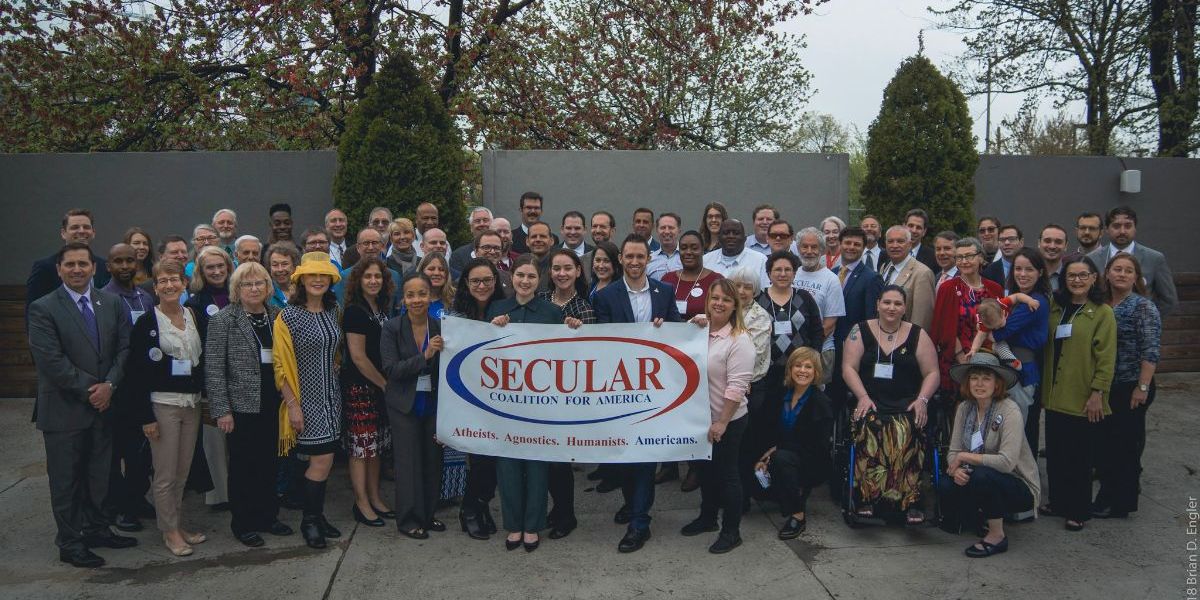 The secular community is the fastest growing voting bloc in the country. Our strong presence at the Capitol shows that we will be a factor in the 2020 election and that we will not sit quietly by as theocratic policies find their way into law.

To reinforce that our community stands together, each Secular Lobby Day we focus on one critical topic that lawmakers urgently need to address.

This year, we are excited to share that we will focus on expanding access to secular, evidence-based addiction recovery programs for all Americans.

There is hardly any state or district in the United States not impacted by the opioid crisis. An average of more than 130 people die of an opioid overdose each day in our country, impacting nearly every community.

If the U.S. is going to overcome this crisis, an evidence-based approach is critical.

Yet the most well-known and most widely accessible peer support programs for those on the path to recovery are 12-step programs, which are faith-based. And while 12-step works for some people, it definitely doesn’t work for everyone.

Secular, evidence-based alternatives are out there, including SMART Recovery, LifeRing, Secular Organizations for Sobriety, and Women for Sobriety. And guess what? They don’t require individuals to surrender themselves to a higher power.

And while Secular Coalition is not opposed to 12-step programs, we know that too many people who need help have been forced to compromise their lack of faith to get the help they deserve. That injustice has happened countless times in the past and it will continue until lawmakers act.

Take Barry Hazle for example.
In February 2007, Hazle was required by his parole officers to participate in a 12-step program as a condition of his parole. He made it clear that he was an atheist, that he objected to participating in 12-step on religious grounds, and specifically requested a non-religious alternative.

He was told that no non-12-step programs were available and that he had to participate or be returned to jail. Hazle refused, and as punishment for standing up for his rights, not only was his parole revoked, but another 100 days in jail were added to his sentence.

Hazle sued, and when his case went to trial, the district court judge ruled that Hazle’s First Amendment rights had been violated by requiring him to participate in a religion-based drug or alcohol treatment program as a condition of parole. He ended up winning a $2 million settlement in 2014 as a result of the parole process.

But as we know all too well in our work, our rights don’t defend themselves, which is where you come in. While Members of Congress on both sides of the political aisle are taking steps to address the opioid epidemic, many of them are still unaware of this issue.

With the help of Center for Inquiry and Freedom From Religion Foundation, whose lobbying teams have joined our efforts, we have made a lot of progress. But there is more to be done, and nothing gets the attention of congressional offices more than hearing from their constituents at home.

We imagine a future where secular support programs are as well-known and widely accessible as 12-step programs, and we believe we can make this vision a reality. By joining us at Secular Lobby Day, during National Recovery Month, you will make a huge difference in lives across the country.